Hey everyone! Let's talk about what we've been up to lately.

So back in November I helped give a talk about the Steam Controller at Steam Dev Days:

I also added conventional controller support, and that should be available in the builds up on GOG, Humble, and Itch, which I just updated yesterday.

Please let me know if you find any issues, and report them on our bug tracker. I've got a thread up on the excellent Steam Controller subreddit so that's another place to post useful feedback.

The latest DQDX engine patch also comes with a fix for a performance bottleneck I was able to identify. However, some players are still reporting performance issues. The tricky thing is that it seems to be really, really, inconsistent and highly dependent on the person's hardware. I'll keep cracking at it, but let me know if you're experiencing any issues and what specific hardware you're using.

Recently I posted a quick transparency update on Defender's Quest II's progress on the forum.

Did you know that the Defender's Quest II automated progress tracker had been secretly broken for months? I sure didn't! It was caused by a PHP server upgrade that I didn't notice. It's fixed now. Needless to say I am super bad at keeping things updated manually, which is why I rely on automated tools like this to report my "heartbeat."

In any case, I've updated stuff so it looks like this now: 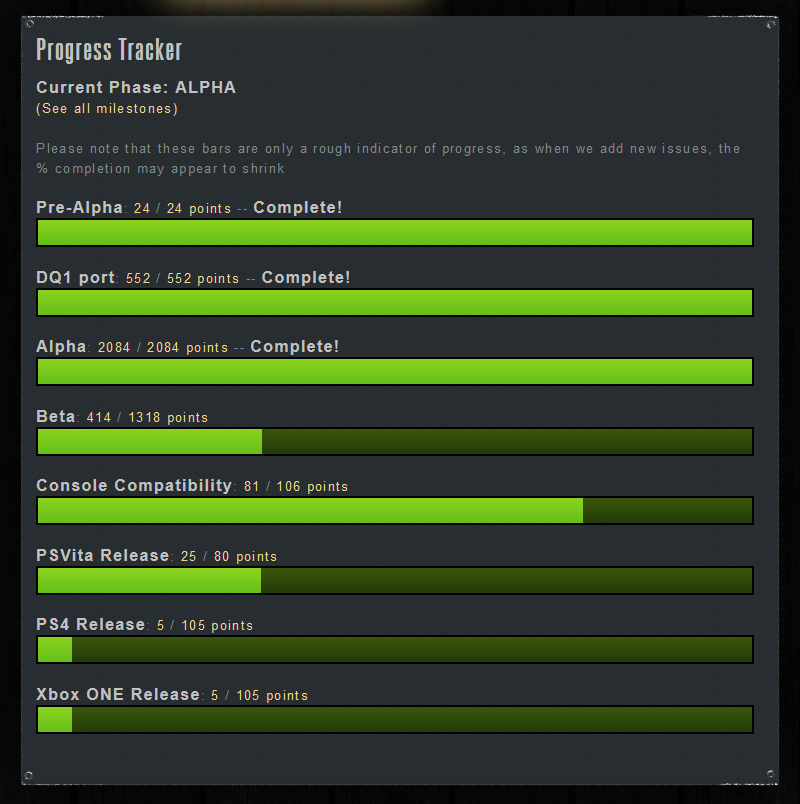 Now that DQDX is finished, we've officially entered the "Alpha" stage of development (we'd technically been in "Pre-Alpha" before that, but decided to open builds to our DQ2 alpha backers for "pre-alpha" anyways).

Our next goal is to get DQII to "Beta" status, which in the Industry traditionally means "all content is complete, just needs to be tested" but for us will mean "as soon as it has any meaningful amount of content for you to look at that won't slice of your fingers."

We've added some new bars to the list to demonstrate this stuff. Beta backers, don't be scared by the Beta bar status -- we'll be opening up access for our "Beta" backers before that bar fills all the way up.

You'll notice there's some console targets in there. Our console engine is basically done at this point and has great support for PS4, XBOX One, and PSVita. It also supports WiiU but with the Switch right around the corner and other things on our plate we haven't decided whether we'll be releasing DQI/DQII on the WiiU or not. Seems best to focus our efforts for now. Right now the console engine is handled by a separate engineer, but I'm nursing things along while I work on the shared DQI/DQII engine and on DQII content.

Which leads me to my next point!

Now that the DQDX engine is done and I've had some time to pay off my technical debt and do several rounds of bug-fixing, we're moving along to getting all the DQII content in. We've already made some good progress but our experience with DQI taught us that we really need a solid pipeline plan to get this done properly.

In DQI, we spent an inordinate amount of time just messing with the cutscene engine, of all things. That's because it was designed for a "simple 3 month Flash game" -- the original vision for Defender's Quest -- and hasn't been meaningfully upgraded since. As anyone who's tried to make a mod can tell you, editing the cutscene format is incredibly laborious. Every character enter and exit, every line, had to be laboriously scripted with lots of wordy xml markup, by hand. Also, the game progress triggers had become a giant tangled mess, with lots of different files and object id handles all pointing to one another, and you had to keep it all straight in your head. The biggest issue is once you had designed anything, it was very difficult to edit -- changing one thing meant changing ten other things that referenced it.

To that end, I've been working on a new tool that automates a lot of this pain away so we can spend more content creation time on important stuff like level design. It'd be foolhardy to throw away all our existing engine guts, though. Therefore, I've created a new format for human editing, as well as a tool to digest it and spit out the same old ugly verbose XML files that the well-tested game engine likes to consume.

I've open sourced this tool, and we'll be using it extensively throughout DQII's development. I hope to eventually make it a part of an official DQI/DQII mod editor.

The new tool will let us write the entire game's dialogue and the majority of it's game triggers much like you would write a screenplay -- in a simple, clean format that's helpful for our writer (who writes primarily using text-to-speech because of a nerve issue with his hands), and the parser spits out the same sort of files we laboriously created by hand in DQI.

4. Have some free open source board games

Back in my college days I designed some board games with my friends that we still like to play when we get together. I even went to GenCon once and tried to sell some of the designs (even had one of my prototypes receive the honor of being laughed at by Steve Jackson -- which it deserved, by the way). Obviously I never became a famous board game designer, which is great because who wants to deal with margins and inventory and overhead? Video games are a much better line of work for me as it turns out.

But you know what? Those games are still fun, and apparently Github exists, markdown exists, and desktop printers exist, so if you want to break out some dorky stupid fun with your family and friends this Holiday season, now you can treat them to awesome board games like Dragon Pants, Surmount, and Ninja Havoc Machines.

Get my nerdy board games on Github

Everything you need to play the games is provided -- just print out some stuff, maybe find some junk or little toys from around your house, and you're good to go. If you don't have a printer you could even just draw things out on notebook paper and index cards or whatever.

I'm working on open source licenses for them as soon as I can contact the collaborators -- I've got Dragon Pants under Creative Commons already, and I think I should be able to get the same for the other two, though I'm 99% sure Sean will agree to that so I feel safe to share them here. Merry Christmas! (For those of you who celebrate that holiday, and on the Gregorian calendar. For everybody else -- happy "Gee, it sure is cold all of a sudden, isn't it?")