DQ2 dev has taken a long time various reasons, summarized as "surviving the indiepocalypse is hard but we did it somehow."

Like literally. We set up an unlisted Steam page already and I already stuck the keys in people's humble accounts. Instructions for access are at the bottom of this post.

Not exactly. Still a ways to go. Honestly we're totally off the map with the formal definitions of "alpha" and "beta" at this point, but we've got something playable. Note that we are intentionally and aggressively using ugly placeholder graphics for everything, because we don't want to falsely indicate that it's more complete than it really is.

So har far along are you?

The current build introduces the first four characters and takes you through the first six missions or so, culminating in a boss fight. We're focusing on mechanics only now so they have placeholder names and graphics. Balance is rough but playable, and we'll tighten things up from here. 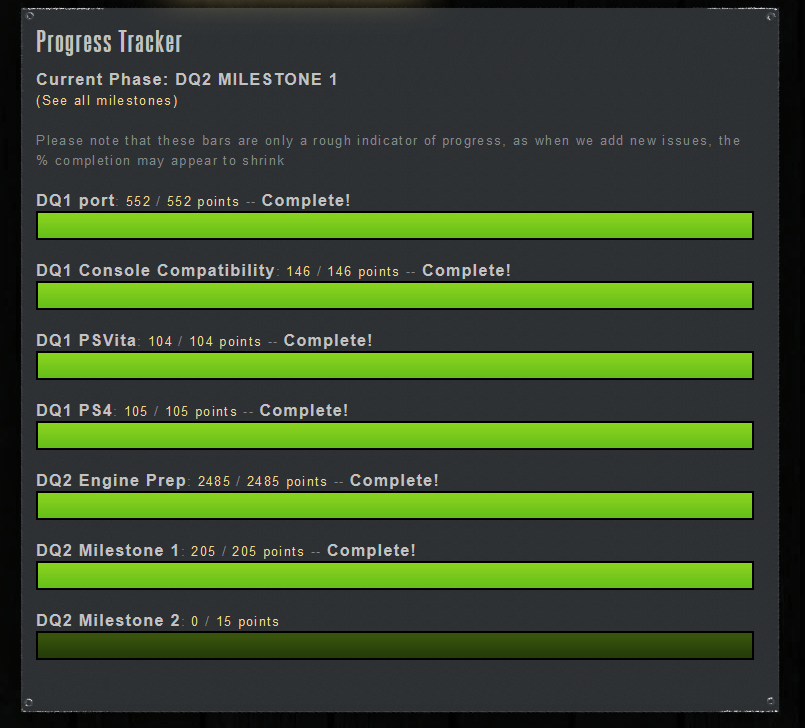 From now on, each of the Milestones at the bottom represents a new major build I'm working towards. When one of the bars fill up, the backer/tester build will update on Steam. And I'll add new "Milestone X" markers as I go. I have no idea how many it will take to get to release, but each one represents some major chunk of progress, meaning new content in the next playable build.

You need a password to unlock the game on steam after you use the key. EDIT: Not anymore! Passwords are dumb since it's already a private key.

Identical instructions will be posted in 3 places:

If the game doesn't load or gives an error, you are not on the right beta branch (needs the password), or the download was incomplete.

What should I expect?

A rough early build of a game that we intend to make better.

When will it have nice graphics and music and story stuff?

When will the next milestone be done?

Dunno, but I'm working hard on it already!

I'm super excited about {feature, character, concept} you detailed in one of your old blog posts!

Thanks :) I should get this out of the way now -- please don't get too attached to old concepts of the game. It was a mistake on my part to try to juggle ongoing DQ1 support with DQ2 development, it led to frontloading a lot of speculative concept stuff and decisions made too early, much of which certainly won't appear in the final game. The early build you'll see today is entirely mechanics-driven and doesn't have any story or art in it yet, and you should reset your expectations for the final game's story and characters to a blank slate. We'll put story, art, and music stuff in when the time is right. Rest assured we're doing our best to make this game the best it can be from every angle -- story, design, music, characters, mechanics. Please pardon our dust in the meantime.

I'm unsatisfied with my preorder.

Sure. Email leveluplabs at gmail dot com and we'll make it right.

When will it ship?

Post em below, or hop onto our discord. I'll answer 'em.