So, it's been a while since we last talked about Defender's Quest 2. I have three big things to talk about today:

So those of you who follow this blog will know we keep a public progress tracker for DQ2. Whenever I cross something off my to-do list, the bar fills up a little more. This way you can track our progress in real-time. 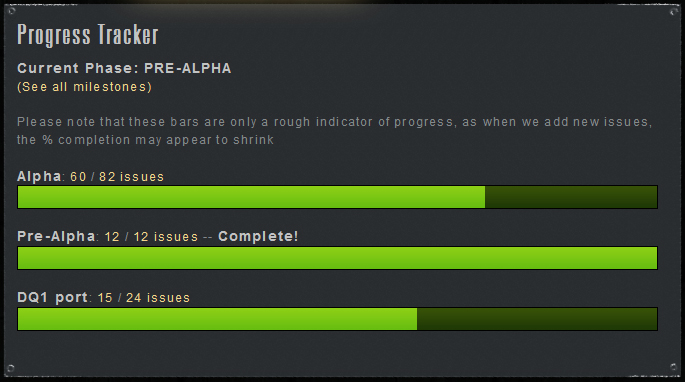 We only have one full-time programmer/producer (that's me) at Level Up Labs. Of course have a lot of other folks that work throughout the year in art, design, and writing, but I like to remind people we're actually a pretty small operation. When I'm not writing blog posts and dealing with paperwork I'm busy working on the new DQ2 engine, which is slowly getting closer to Alpha status.

For those of you unfamiliar with developer jargon:

We've gone ahead and given our Alpha backers access at the Pre-Alpha stage as a sign of goodwill. We've had some trouble with Humble's forms, so if you haven't received your invite, get in touch with us at leveluplabs@gmail.com or PM larsiusprime on our forums. Beta backers will receive their access at the Beta stage, when the game is content-complete.

Starting out, we wanted to make sure the new engine worked well before we began investing too much effort in art content, so I started by just plugging the original DQ1 game data files into the new engine. Somewhere along the way I realized, "Hey, if we can get some artists to HD-ify these assets while I'm plugging away at this engine, we could probably re-release DQ1 without slowing down my progress on DQ2. Then people could run DQ1 in glorious HD at real native-speed instead of locked to 800x600 in Adobe AIR."

So that's exactly what we're doing.

Defender's Quest: Valley of the Forgotten will receive a free update sometime in the near future, that we are calling "DQ1HD." Since every DQ2 pre-order backer gets a free copy of DQ1, we see this as a way to give you something to play with while we're marching towards DQ2, and also a great opportunity to ensure the engine is tested and mature by the time DQ2 is done.

We'll be upgrading the sprites:

As well as the cutscenes:

What resolutions will DQ1HD support?

In theory anything above 600 vertical pixels, but we're offically targeting the most popular 16:9 resolutions for testing -- 1080p, 720p, etc, as well as the most common 4:3 resolutions. The new engine features a dynamic UI that can stretch, scale, and reorganize elements in response to screen size.

Will this slow down DQ2 development?

No. We've hired separate art contractors to HD-ify DQ1, and robustly testing the DQ2 engine against DQ1's data set was already a big part of my job in building DQ2.

What if I really liked the old art?

Both HD and "old school" art will ship with DQ1HD, and can be individually toggled for both cutscenes and sprites.

Yes. This will be tested thoroughly.

Will old mods be compatible with DQ1HD?

Some things have changed in the file system, so they won't work as-is. That said, we will try to make DQ1HD ship with an automated import script to convert them. NEW mods made in DQ1HD (either original or converted) will not work with the old DQ engine.

What will I have to do to get DQ1HD when it's released?

Very little. Steam players will get it automatically, our direct customers will get a notification from the auto-updater, etc.

Did you use DQ2 preorder money for this?

No. DQ2 pre-order money is spent only on engine work (which benefits both projects) and DQ2-specific content. DQ1HD's new content was funded by ongoing DQ1 revenue.

Is this a prelude to releasing DQ1HD and DQ2 on home consoles?

Yes, among other things. We have the intent to release both games on home and/or handheld consoles eventually; we are not officially committing to that just yet, we want to do a good job on PC first.

We will probably never release any DQ games for phones, the screen sizes are simply too small for such a complicated game. As for tablets... maybe someday, but it's currently at the bottom of our priority list. I wouldn't get your hopes up.

Will there be new features in DQ1HD?

Since this is a free update we're not looking to add lots of new content that will distract us from marching forward on DQ2, or require extra programming effort from me. Besides, according to my data about 80% of you still need to beat New Game+ mode :)

That said there will be a few changes:

Most of our progress towards DQ2 has been engine stuff, but James has also been hard at work on fleshing out the story and we've got our artists working on both concept pieces and battle animations.

A Friendly Farewell to Dean Dodrill

First of all, I regret to announce that animator Dean Dodrill of Dust: An Elysian Tail fame has left the project (amicably). Long story short, life happens, and Dean needed to focus his energies elsewhere. Having myself been the lead developer of a multi-year game project, I certainly know the feeling. He remains a friend and we wish him the best on all his future endeavors!

The good news is that after a bit of searching we've filled his position. The new animations you see here are courtesy of Blake Reynolds and Vladimir Gerasimov. Some previews (please pardon any visual or timing artifacts resulting from the GIF-ification process) :

As you can see, Defender's Quest 2's animations are in good hands :)

So let me take this occassion to talk a little bit more about a few of the game's characters. Technically, purists might consider some of this spoiler material, but rest assured we're holding back the biggest secrets. 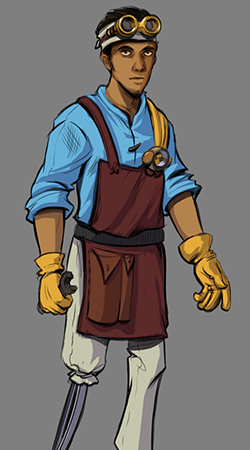 "It's another wonderful day as expendable monster fodder"

Every Scavenger Ship needs a Captain like Javir – someone to steer the giant monster that carries the ship, boss people around, teleport defenders onto the field to fight, teleport defenders back into the ship before they die, fire the cannons, write and receive messages from Glizzerat, etc.

A typical day for Javir goes something like this: 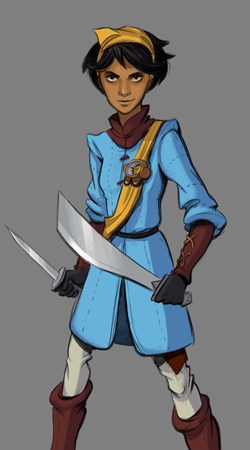 In battle, Terevan serves as the party's front-line melee unit, specializing in crowd control. And by "control," we mean "destroying with a double dose of sword-flavored doom in as showy a way as possible whilst preserving enough un-mangled bits to craft into a fetching handbag at a later date."

Terevan's philosophy towards life can be summed up into 5 easy steps:

One Stab does it.

When the rest of the crew is a set of twins, it's a little hard to fit in, especially if you're brand-new to the job. New Guy probably has a name. Maybe something like "Fresh Meat," or "Only-1-in-3-Recruits-Survive-Their-First-Year-As-a-Scavenger-So-Why-Bother-Getting-Attached."

Of course, New Guy spent the whole first year of his adult life (age 14) killing monsters in the Research Arena (for science!), so he's not entirely helpless. On the battlefield, his ability to cripple fearsome enemies with surgically precise stabs even draws some begrudging respect from Javir and Terevan (although they'd never say it). Still, New Guy's relentless optimism completely ignores the First Fundamental Rule of the Universe: "Everything will always be crap forever." Plus, his presence is a constant reminder that the old crew is broken up and never getting back together.

(There should probably be a step 2.5 in there where Kullabi the Food Cart Girl learns that New Guy exists, but that's just minor details.) ----

We also have our first musical tracks coming in! Kevin Penkin has been hard at work alongside Nobuo Uematsu working on the new soundtrack. For today we'll just be showing off some samples from tracks that Kevin has composed by himself, keep in mind everything you're listening to is very much still "work in progress!"

We'll follow up with some more posts later with further details, including some of the new gameplay stuff we'll be trying out in DQ2.

If you haven't already, you should consider pre-ordering Defender's Quest 2, not only will you help with development, you'll get an early reduced price, as well as a free separately giftable copy of the original Defender's Quest (which will itself eventually receive a free upgrade to Defender's Quest HD).

Teasing some stuff for next time: 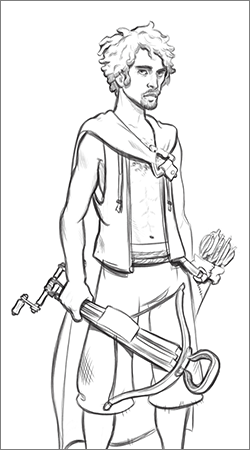