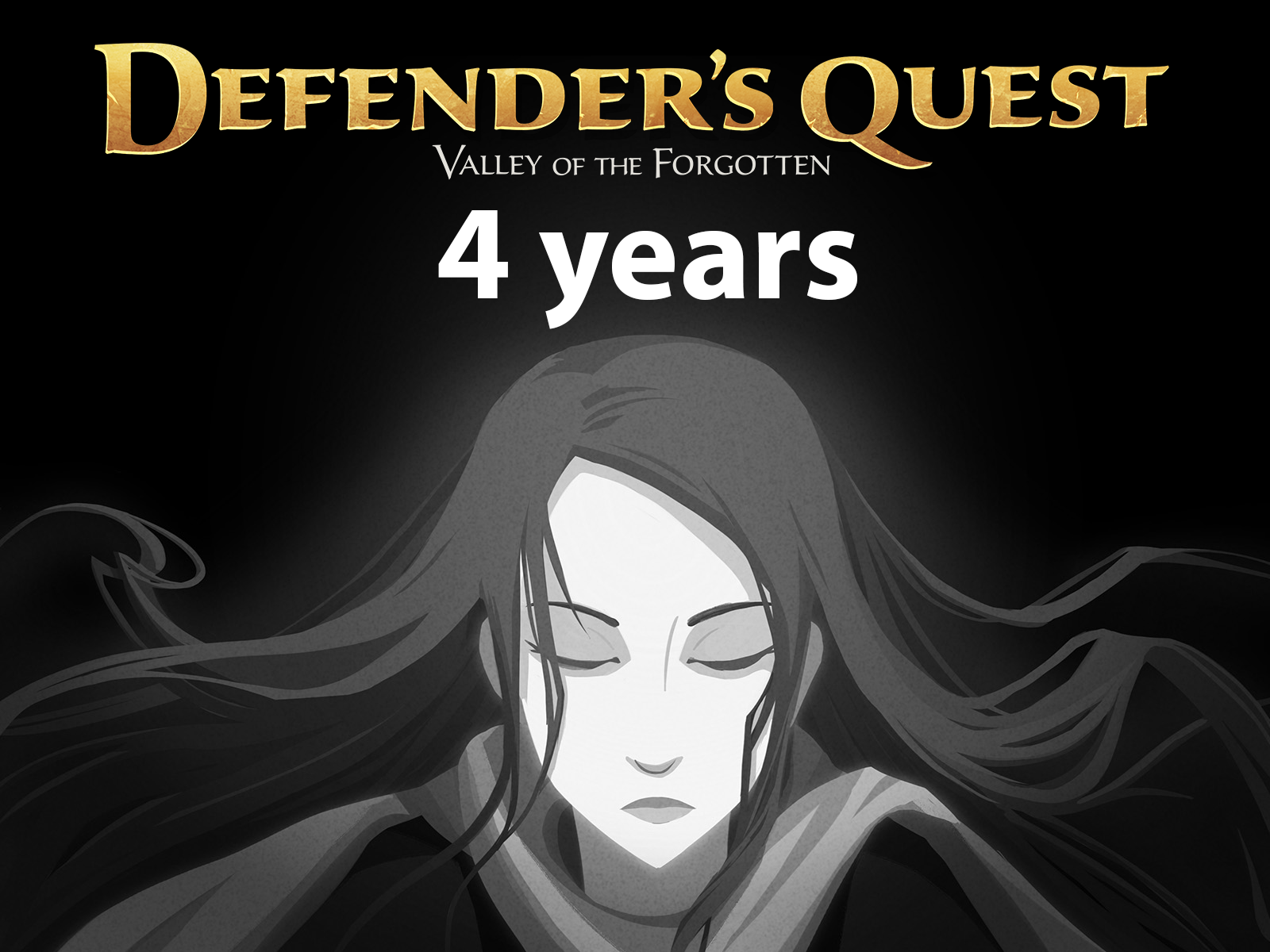 It's hard to believe, but on January 19th 2016, four whole years will have passed since we first released our game Defender's Quest: Valley of the Forgotten. What's even harder to believe is that we're still actively supporting it with patches and updates, with the biggest one of all soon to come (Q1) -- a free HD upgrade.

The HD upgrade has a playable demo out now, and upon release will have the following new stuff:

We'll follow that with a release on home game consoles, allowing for certification time. We're currently leaning strongly towards: Xbox One, PS4, WiiU, and PSVita. The final list may change, we'll keep you posted.

So why on earth would a game this old still be worth supporting with such a big update four years later?

Well, because people keep buying it. Curiously, DQ doesn't seem like the kind of game that should last that long, at least at first glance.

It would be less surprising if DQ was multiplayer, an open-world survival sim, endless, or heavily procedural, but it's none of those. It's a single-player RPG with a largely linear character-driven narrative and a finite (albeit large) set of hand-crafted tower defense battles.

Until recently, the notion of updating games at all was radical. Here's Joel Spolsky, in "Five Worlds", back in 2002:

Once your users have played through Duke Nukem 3D, they are not going to upgrade to Duke Nukem 3.1D just to get some bug fixes and new weapons. With some exceptions, once somebody has played the game to the end, it's boring to play it again.

Things have definitely changed since then. Digital patching is painless and online stores make Stegosaurus Tail sales graphs possible, in sharp contrast to the old retail model where it was one launch spike and then the bargain bin. But there's a little more to it than just changing times, so let's dig in.

Here's what we're gonna talk about:

Let's take a closer look. Here's a chart of our quarterly sales and revenue over time, mixing all stores together. (Quick bit of context -- we didn't launch on Steam and GOG until late 2012): 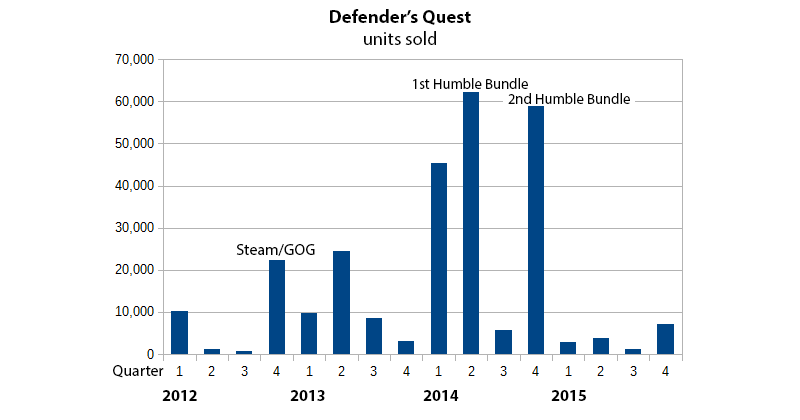 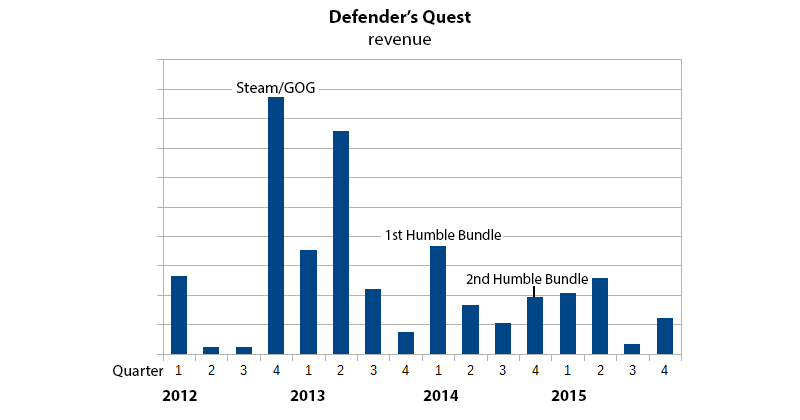 All told, the game has had over 150 patch versions since initial release, not including the forthcoming HD upgrade. This includes numerous bug fixes, eight full localizations, and a few new features mostly related to interface and usability. To give you a sense of how far things have come, here's how the game looked in January 2012: 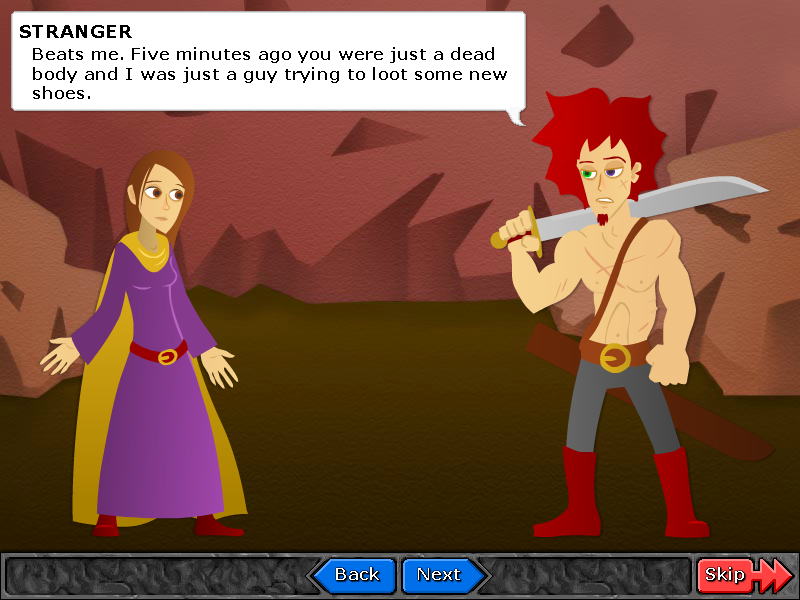 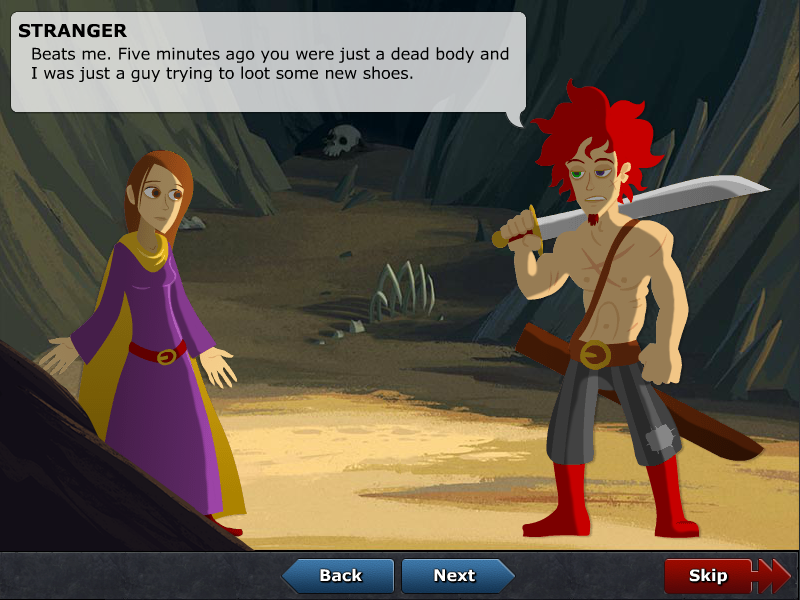 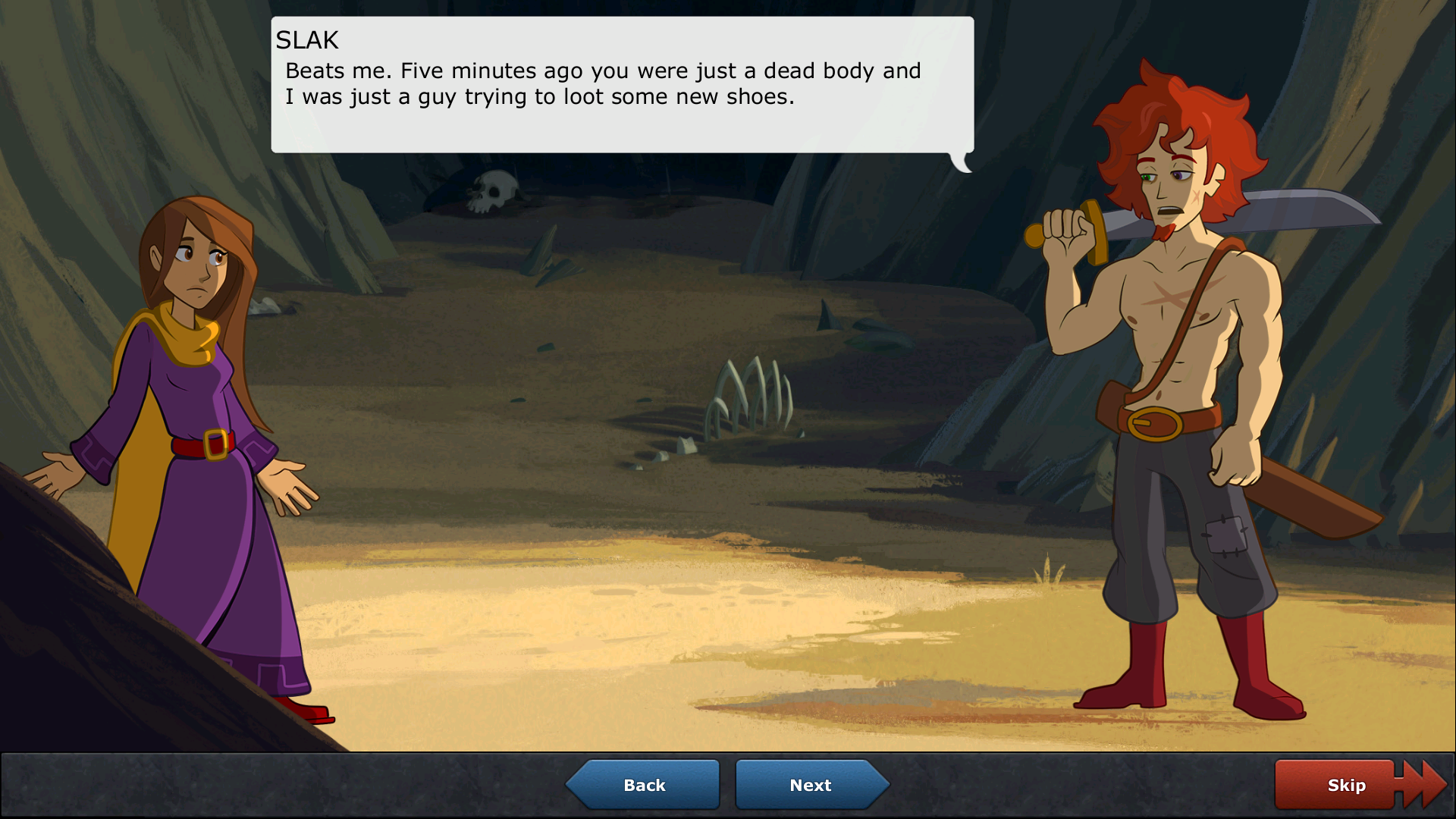 And although we didn't make a huge splash with the press, those outlets we did reach had things like this to say:

So by every major metric -- sales, critical reception, and player engagement, DQ is a success. It's no Bastion or FTL to be sure, but it's more than we ever dreamed of, and we're extremely grateful to still be here after all this time.

So how did this happen? As awesome as I like to think our game is, I'm well aware of its weaknesses, particularly in relation to marketing.

Tower Defense was considered a played-out genre even in 2012, and RPG's have been mashed up in more ways than Harry Potter fan fiction. "Tower Defense RPG" is not an electrifying pitch.

And as I said before, we didn't do a brilliant job of reaching the media. We never got enough mainstream reviews to trigger a Metacritic rating, and we fared similarly with major Youtubers and Streamers. We gave a talk or two at GDC and PAX, but never showcased with a booth, let alone won any awards.

And then there's the elephant in the room: we've released lots of updates and patches, but other than mod support, Defender's Quest hasn't added any major new features, story, or game content since it was first released on Steam/GOG. (Updates comprised -- lots of bug fixes, a few balance tweaks, some new items, mod support, various Steam integrations, and eight full localizations).

So I think it's safe to rule these out as explanations for our sales figures:

As flattered as we are to have a Rock, Paper, Shotgun writer call us the "best Tower Defense game" they've played, and as seriously as we take Tower Defense, we're a bit reluctant to hastily crown ourselves as genre kings.

That said, Defender's Quest might have a claim to a slightly smaller throne - an emerging genre I like to call the "Tactical Defense RPG", or "TD-RPG[^1]".

A TD-RPG has the structure, metagame and storytelling tropes of a JRPG/TRPG, but has a specialized tower-defense battle system where your party members are the "towers" who also persist outside of battles, gain experience, level-up, and possess individual skills and equipment.

We are by no means the first TD-RPG as defined above, but Defender's Quest is perhaps the Poster Child, at least in the eyes of certain critics.

Also --and I hope it's not pure hubris to say so-- Defender's Quest has all the markings of a "sleeper hit." I say this because it keeps quietly selling copies without being one of those games that everybody is talking about.

Our demo was a big help with that -- on Steam nearly half our demo players became buyers and our Kongregate purchase rate is also well above average (3.1% to date), with players frequently commenting that ours was the first or only game on Kongregate they had spent money on.

A long, web-based demo was essential to our success because we had the tough situation of being a good game that didn't immediately look good and sound good based on screenshots & pitch alone. You really had to just play it, and the web demo made that easy.

We have stats to back this up -- as I detailed in our first article back in 2012, coupons tracked nearly all of our early direct sales back to the web demos posted on Newgrounds and Kongregate:

Nowadays plenty of people buy the game sight-unseen, but the demo was essential for boot-strapping our reputation, and continues to win over skeptical players.

But a solid demo wouldn't have been enough by itself. Take another look at our sales chart from earlier:

We had the good fortune of launching in the less-competitive environment of late 2012, but even so, almost every sales spike on that graph is tied to a specific opportunity we managed to seize by staying in really good touch with our contacts at Steam, GOG, Kongregate, and the other stores. If we'd missed just a few of those chances, we would have made a fraction of our current sales. (For more information, see the articles filed under the business and dq1 tags.)

Next, I can't overstate the importance of the Steam Discovery Update -- see my previous article I Wish Upon a Steam for full details, but long story short, our residual (non-promoted) sales picked up after the update and since then have never returned to their pre-discovery-update lows.

Finally, there's something to be said for slowly building up visibility over time. For one, I'm still surprised by how much reach we've gotten from blogging. We don't get astronomical traffic, sure, but I'm constantly running into people who recognize us from this or that article, and I've even had developers tell me they cited our writing in (successful!) pitches to funding agencies. We've graduated from being total nobodies to being kind of somebodies. I mean, as of this writing we may not have our own Wikipedia article, but at least we are literally a footnote in the games business!

Has Senpai noticed me yet?

I'd like to close with an interesting lesson I learned about the media.

As I said before, Defender's Quest got some attention, but not a whole lot. Meanwhile, I've written a bunch of articles on other topics. And to my great surprise, not one but several of those made their way to the front page of reddit.com/r/games, Hacker News, slashdot, and more. These articles usually only mentioned Defender's Quest tangentially, if at all:

That last one was really interesting -- it was basically a crappy prototype I threw together over a weekend and still haven't figured out what to do with. And yet based off that alone it got written up on The Penny Arcade Report, IGN.com, NBCNews.com, The Huffington Post, IndieGames.com, IndieStatik.com, and Rock, Paper, Shotgun.

And although Defender's Quest has never been featured in a video by luminaries like NorthernLion or Total Biscuit, I can recall both of them mentioning the genre moniker "Procedural Death Labyrinth" (PDL for short), which I coined a while back.

So here I am, constantly trying to get media attention for my game, only to find all these other things I write about in my spare time catch fire instead. Why's that?

Obvious Answer: journalists and readers do not exist for the sole purpose of helping random indie game developers get rich & famous :D

Instead, I suspect those articles got big because they tapped into things people already cared about.

The HD Remakes series was timely commentary on the terrible PC ports of Final Fantasy V & VI. My various articles on Haxe and OpenFL tied into the ongoing controversy about Flash's decline. Likewise with PDL -- I expect people to keep arguing about what to call "Things that are kind of like Roguelikes but different" for ages to come. And Tourette Quest, despite being an awful mess of a prototype, had a compelling pitch (what if Link from Legend of Zelda had Tourette's Syndrome?) and taps into widespread social fascination with the disorder.

None of those articles lead to any sort of major sales spikes for Defender's Quest. I also watched the stat counter on my blog and there was very minimal spillover to other articles, let alone to the Defender's Quest page.

And anyways, as I've mentioned in some previous articles we've written, we haven't seen a strong correlation between press attention and increased sales, and plenty of other developers have echoed this result. My suspicion is that saturation-levels of press attention can make a big difference, but a single isolated mention -- even a big one -- probably won't move the needle. So, by all means, reach out to the press, youtube, twitch, anyone who will listen, just make sure you're doing it for the right reasons.

The point I'm trying to make here is:

Senpai is not your customer

When we first started out, I really wanted to be like Super Meat Boy, Spelunky, and FEZ, winning the IGF and even Game Developer's Choice awards, with big reviews in Kotaku and Polygon, a fanatical following of fan-artists on Tumblr and DeviantArt, and hundreds of episodes from all the biggest Let's Players.

Instead, we slowly and steadily built up a head of steam and now hundreds of thousands of humans have played a game we made, and we make a decent living and get to keep doing it.

You know what? If I have to choose between being famous and making a decent living entertaining lots of humans, I'll take the latter. This is an incredibly competitive field and we're incredibly blessed to have any success at all, let alone this much.

Thanks for your support everyone. We couldn't have done it without you.

Here's to the next four years!

[^1]: "Tower Defense RPG" works too, but that's a bit ambiguous as it could also refer to running-around-a-maze-dude-setting-traps games like *Dungeon Defenders* and *Orcs Must Die*. ↩︎